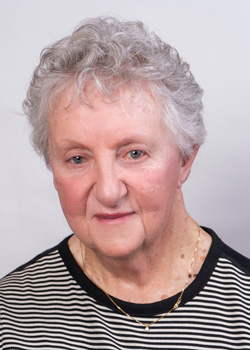 The Randolph Academy Board of Education said good-bye to one of its longest-standing members this month, as Ruth Henry stepped down from her post and retired after 26 years of dedicated service.

Mrs. Henry was appointed by the state commissioner of education in 1996, after having served on the Pine Valley School Board in Cherry Creek, N.Y., for 17 years, including one term as president. She leaves our board following a remarkable six-and-a-half terms, during most of which she led our finance and audit committees.

A native of Staten Island, N.Y., she and her husband, Robert, moved to the region after their hometown experienced a flood of new residents.

“Believe it or not, Staten Island used to be a mostly ‘country’ area, but then they built a bridge and people came in droves,” Mrs. Henry recalls.

Longing for a return to the more rural lifestyle to which they were accustomed, they bought a converted farmhouse on 43 acres of land in Cherry Creek. There they opened a gun shop, which they ran for decades while raising three children, Lauren, Jodie, and Jason – who served as the district’s 2022 Commencement speaker this past June.

In addition to her committee leadership, Ruth was a vocal supporter of the district’s move to its restorative justice model for student development and behavioral management.

“She was also involved in state lobbying efforts for the district – and public education, in general,” adds Board President Mary Myers. “And she pushed for new playgrounds on both campuses, due to the importance we place on quality outdoor education, exercise and other activities for students.”

“I enjoyed every minute of it, and I had the full support of my husband,” Mrs. Henry attests. “He always knew it’s what I wanted to do, and if I had to do it all over again, I would in a minute.” Thank you, Ruth, for all your years of support and dedication to our students, staff and community. We wish you a long and rewarding retirement!