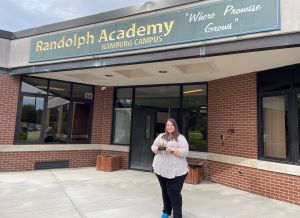 Randolph Academy has selected Shelly Harris as its 2021 “Golden Apple” Award recipient. She received the award at the Sept. 21 Board of Education meeting during a brief ceremony.

Ms. Harris joined Randolph Academy in 2014 as its school nurse and has since cared for several hundred children ages K-12, each of whom has had unique emotional or mental health needs. The honor, which recognizes an individual’s outstanding professional contribution and achievement, is given annually to an individual at each of the academy’s Hamburg and Randolph campuses.

“Typically, this award is presented to a teacher who demonstrates excellence and has a positive effect on students’ lives and school communities for the purpose of student growth and learning,” said Superintendent Danielle Cook. “However, this year’s award is being presented to our nurse because she has gone above and beyond during this global pandemic, under the threat of a significant impact on our learning environment.”

Harris’ efforts have ensured that Randolph Academy remained open for in-person learning as much as possible during the pandemic, which is especially important to this student population, for whom schedules and routines can be important for continued growth and maturation.

“Shelly has advanced her knowledge of and expertise in serving individuals with mental health needs in both a hospital setting and here at Randolph Academy,” Cook added. “This willingness to engage in both worlds is evident in her calmness and leadership in times of crisis, and is the epitome of ensuring that our students are growing and learning.” Harris is a New York State-registered Professional Nurse. She earned master’s and bachelor’s degrees in Psychology from Medaille College and The State University of New York at Fredonia, respectively. She also holds an AAS in Nursing from Jamestown Community College. She resides in South Dayton, N.Y., with her daughter.