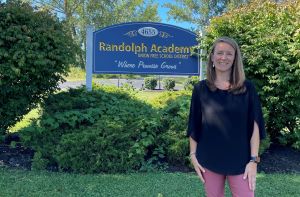 Randolph Academy has appointed Laura J. Osinski as the new Principal of its Hamburg campus.

She began her tenured career in the Frewsburg Central district where, for five years, she taught physical education to elementary, middle and high school students, while also coaching varsity tennis and swimming. She later served the Springville Griffith Institute, teaching elementary students from the Springville and Colden communities.  Mrs. Osinski also taught Physical Education and Health as a long-term substitute teacher for the Hamburg, Dunkirk and Lackawanna school districts as well as coached modified track and was student council advisor.

“Mrs. Osinski has shown us that she’s a passionate, student-centered educational leader, eager to make a difference in the lives of our students,” said Randolph Academy Superintendent Danielle Cook, who oversees its Logans Lane campus in Hamburg in addition to its original Randolph, N.Y. campus. “Through the interview process, Laura demonstrated a calm demeanor, thoughtful responses and a creative approach to working with team members. We’re very excited to add her knowledge and skill set to our growing and continuously improving team.”

Osinski’s leadership experience includes serving as department chair and district co-chair of various health, phys. ed. and wellness committees. She has also been a curricular coach and mentor, helping colleagues to learn and transition to new instructional styles and best practices. In addition, she has been an instructional leader, providing presentations at multiple conferences at the state level.

“I’m absolutely thrilled to be joining Randolph Academy and its team of dedicated and innovative teachers and staff,” Osinski said. “This district’s reputation for serving students with behavioral health challenges, as well as its expertise within the restorative justice and normative culture approaches to education, are well known throughout Western New York and beyond. It’s an honor to be joining such a formidable education trailblazer, and I look forward to enhancing its strengths.” Osinski holds a master’s degree in Multidisciplinary Studies from Buffalo State College, and is adding a second master’s in Education Administration from Niagara University, which she expects to complete in December of this year. She also has a bachelor’s degree in Physical Education from SUNY Brockport, in addition to New York State (NYS) certificates in Health Education (K-12) and Physical Education (PK-12) and School Building Leadership. She will add a NYS School District Leader certificate upon completion of her second masters at the end of the year. She resides in Eden, N.Y., with her husband and three sons.